On banning the burqa 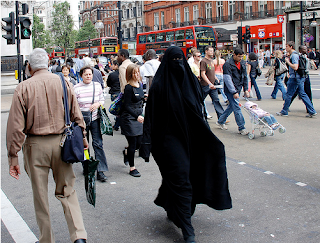 "Tolerance has its limits. They don't like our culture or our identity, and the burqa makes that obvious. It's a barrier."

I listened while my friend put his case clearly, and it would seem, quite reasonably, in favour of banning the burqa in Britain.

He added: "If I went to an Arab country I'd abide by their laws. I may not like their laws, but I'd do it. And when I've been to Asia I've always dressed more conservatively than in England, to fit in. That's me being tolerant, and when people from other cultures come here they should do the same".

I had no argument at the time because I couldn't think of one. It's an understandable viewpoint and one that's felt by many across Britain. In fact, in a recent poll 57% of Britons agreed with him. But now, with the benefit hindsight I do have an argument.

He's wrong, and I think I know why he's wrong.

In France, where a total ban has strong public support, they have no such dilemma. The French President, Nicolas Sarkozy, said the burqa was "a sign of debasement". The Immigration Minister, Eric Besson, described it as a "walking coffin". The National Assembly have already approved a ban, and it didn't exactly go to the wire: 335 votes to 1. It now moves to the Senate and if it's passed there, it will become illegal in France to wear the full veil anywhere in public. Belgium, Spain and the Netherlands are also considering such a move.

Three reasons are given in defence of a ban: security, sexual equality and secularism.

Security is probably the strongest reason, although I'm pretty sure full-face coverings can be removed for security reasons anyway, and must be removed for teaching and in the courts. On the second point, would fining a woman for wearing clothes that she has freely chosen to wear really be furthering the cause of sexual equality? And if she is being forced to cover her face when she leaves the house, would a fine, which may force her to stay at home with a dominating father or husband also be furthering the cause of sexual equality, not to mention liberty and fraternity? And on secularism, I'm pretty sure the veil is a matter either of conscience or tradition rather than any Islamic law.

But there's a fourth reason. The wearing of burqas and niqabs equates in many Western eyes to 'hardline' Islam. This is seen as a threat, not just to certain European republican ideals of (hardline) secularism, but also as a threat to our Western culture, identity and values.

Britain too seems to be spending a lot of time debating its values and identity. Our politicians have been doing most of the talking. They may think they know what it is to be British, but like us they struggle to define it, often sending out confusing and contradictory statements. But like us, they don't really know either because there are no neat, conclusive answers about British identity, and historically there never have been.

The question of values is a complex one, but perhaps it is easier to answer. I don't know enough about the rest of Europe, but at the heart of British values - the cornerstone if you like - is our tolerance. Our British sense of fairness and tolerance does really exist. It's the thing that fundamentally shapes our society; the DNA in our continuing cultural evolution.

British Muslims too are changing. And they are changing because they are here. There are fundamentalists whose views and actions are horrifying, but I hope that the next generation will see fewer extremists. Maybe over time, living in a tolerant country that doesn't ban items of clothing, it might just eventually influence even the fundamentalists to change for the better. A Muslim woman, of course, may well continue to wear a burqa or a niqab however moderate her views may become, but it's no business of the State if she does or why she does.

We can only hope that Britain's increasingly tolerant society will eventually help to break down perceived barriers. But it won't happen if we allow the State to decide what clothes an individual can or cannot wear. It would set a bad precedent.

My friend was right. If he went to another country he would respect their customs and traditions. But he would do it because he grew up in a comparatively liberal, tolerant country. It's something he should be proud of, not angry about. And if he sees a woman wearing a burqa, even if it annoys the hell out of him, the tolerance which he claims to have requires him to put up with it. It's not about being weak. It's about being strong.
Posted by Bob's Head Revisited at 13:55 2 comments

Alex Higgins: a force of nature 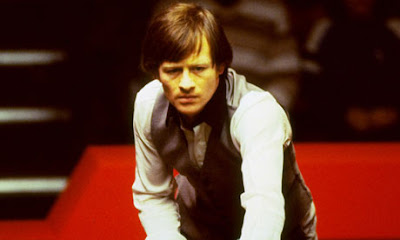 Few can be surprised by the death of Alex Higgins. He'd been unwell for years. Eighty fags a day, a cocaine habit and a lifetime of intense activity at the bar had caught up with him long before his ravaged body succumbed in a lonely Belfast flat.

It was a sad ending, but far from a sad life.

In his heyday, which spanned at least a decade, he was the best snooker player in the world. No one could touch him for sheer skill. He played snooker the way most of us wanted it played: fast, unpredictable, exciting. He was an entertainer who played the way all of us snooker fans would love to have been able to play if we hadn't been shit.

Higgins was 'a force of nature', I suppose. But not a genius. He will be called a genius many times over the next few days, but to me it seems almost an insult to him. A genius is brilliant but doesn't know why. But I suspect Higgins knew exactly why he was brilliant  - he knew the demons that tormented him and drove him on.

And then there was his personality - a manifestation of that 'force'. And a strange thing it was.

I saw him play once, years ago in a bar near Brighton. It was a quiet evening with few punters in. He was just in there drinking on his own. This was the 1980s when he was still pretty much in his prime.

A friend of mine plucked up the courage to challenge him. £50 a frame. You'd think this superstar - for that's what he was - would wave that sort of thing away. But he jumped at it. We offered to buy him a drink but he insisted on getting the round in.
The thing I remember most was the way he played. Higgins played like he was at the Crucible. There was no joking or mucking about at all. He looked like someone who was carrying some awful memory around that he couldn't shake off. He muttered to himself. In the end I began to feel as though he'd forgotten we were there.

There were of course moments of jaw-dropping brilliance, but in the end he just missed too many pots. He lost - badly. He'd been on the Guinness all day and it showed. My friend was a pretty good player, but only in local clubs. But he was also sober. In the end Higgins slapped the £50 on the bar and left.

I bored everyone with that story for years. But to me, as a young man, he was so many things that I wanted to be. He seemed to have everything - and he did. But of course a man like Higgins will always have everything to lose. It's just the way it is.

There is something horribly inevitable about Higgins's decline and sad death. You just somehow knew it would happen like that one day. Even then, in that nothing sort of sports bar back in the 80s, you just knew that this amazing man was never destined for punditry and a twilight of sweet sherry and Radio 4. He wasn't like us. To us he was like an electrical forcefield in a waistcoat. He made the air move.

It's a funny thing about these 'forces of nature' like Alex Higgins and George Best. That very force that drives them on ultimately destroys them. They always seemed to do everything in a hurry, perhaps because they somehow knew that it would leave them soon. And without it they were just like you and me, and they couldn't stand it.

RIP Alex. (And thanks for the Guinness.)
Posted by Bob's Head Revisited at 15:11 0 comments

I’ve got a spare ten minutes so I thought I’d write something. Anything.

Well, my hair's looking good today, you'll be pleased to know. The Bohemian bouffant look is very in. Very now.

I got told off (again) today by an old lady. I’d left some screws on the pavement and she was waving at them with her walking stick.

She's a nice woman, really, with mauve hair, bent back, thin rouged lips and a wobbly voice. I was polite and she tottered off waving her stick in the air.

She had got barely five feet away when her bum exploded. The blast was so violent and so sudden that it actually made me jump. A cat on a nearby car bonnet scrambled off in a panic and froze on the road.

The old woman didn't stop or say anything, she just carried on walking, albeit slightly quicker.

The second blast was more sustained, more vuvuzela. The cat shot me a shiny green glance as if to say, 'I don’t know what that is but I’m just gonna start running', and flattening itself to about one inch high it slid away, picking up speed before disappearing as a low dark blur under a hedge.

There were more cannonades, but I’d already run inside the house, partly for safety reasons, and partly so that the old woman couldn’t hear my hysterics. I didn’t stop laughing for about an hour.

Sorry, I've nothing else to say yet.
Posted by Bob's Head Revisited at 00:32 1 comments

Email ThisBlogThis!Share to TwitterShare to FacebookShare to Pinterest
Labels: No idea

When I can be bothered…

… I suppose I should start blogging again.
Posted by Bob's Head Revisited at 16:48 0 comments